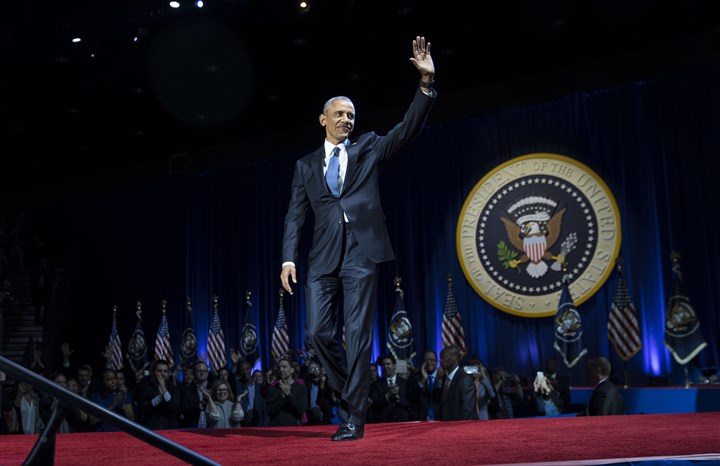 Last night, President Obama gave his farewell address in Chicago to a crowd of over 20,000 people. President Obama will leave office in nine days, and that change will be positive for some, and negative for others. Obama has stated, last night and at multiple other times, that the transfer of power to the next President can, and will, be a peaceful one. This election was seen as ‘different’ because you either ‘loved’ or ‘hated’ a candidate. The election turned out to be in Trump’s favor, and we all need to respect that, whether or not our views matched his because this election was a representation of our democracy.

“America is a better, stronger place than it was when we started.”

“Focus on the state of our democracy” was the main idea of Obama’s farewell address. Obama’s first topic was that we need to realize that “everyone has economic opportunity”. When he gave his first point, he was basically outlining the idea that no matter what race, gender, or sexuality you are, there is basically nothing stopping you from opening a business, presenting an idea, or putting yourself out there. Only we can remove the barriers that are preventing us from doing what we love to do, and sometimes we ourselves are the ones creating the barriers in the first place. In order to get the future we want, we must take risks in the process. As Obama said last night, for every two steps we take forward, we take one back. For women’s rights, this is extremely true because we are now able to vote and do many other things that men are able to do, we still have a very large gap in pay between men and women. The only way we can fix the problems we have is to go above our potential and make the changes ourselves and not wait for others to do so. Although we may have come very far within the past eight years, the “progress we’ve made is not enough.” We don’t have the right to complain about people being ‘lazy’ or an ‘ineffective citizen’ if we don’t give them the opportunities that they need in order to get back on their feet.

Obama’s second topic of the night was that we will never have a post-racial America. We have come farther than people back in the 1950’s would have ever thought we could come, but we’re not even close to where we need to be. Something Obama mentioned last night that interested me was that, in order to have large parts of the future workforce be able to do their job, we need to train them in order to do so. The racial diversity in the United States is noticeably growing, and by the time today’s kids are working, the people we consider ‘minorities’ now will be a majority of the population, therefore we need to look past race and give them the same opportunities that everybody else has. It may surprise many, but many people still want to have segregation be part of everyday life, including having separate housing and schools. A point that Obama brought up was that we need to keep the laws banning segregation and discrimination upheld, no matter the cost because there are people out there who are willing to do anything to have a separated America. The laws are not the only things that need to change; our hearts need to change as well, and if they do not change, we will be challenging what our founding fathers said regarding natural-born Americans. Do ‘minorities’ who were born as a natural citizen of the United States deserve the same rights as we do? Yes, they do. Many, many people are against Muslims entering our country because they think that they will be a threat. Back when the Italians, Irish, etc. entered our nation, people thought the same things about how they were going to ‘ruin our country.’ Obama mentioned that we are starting to only believe things that agree with our views, and we are not looking at what is actually going on around us. It’s almost like we block out information that we do not want to be true, and filter others so that we only hear what we want to hear. During these next four years, we need to come out of that ‘bubble’ and challenge ourselves.

“I reject discrimination against Muslim Americans, who are just as patriotic as we are.”

The third problem that Obama presented was that “politics are a battle of ideas.” With all of these biased news outlets, nobody knows what to believe anymore and that’s causing people to stay closed-minded and without a “common base of facts”. Without a common base of facts, we will be more separate than ever. Another extremely debatable political point that Obama made was that we have made much progress with the prevention and controlling of climate change, but many politicians think that there are bigger things to deal with first, politicians including Donald Trump, our future president. When the problem is denied, it betrays America. We can use the freedom that we have been granted by showing people the problem and making it known to everybody. We must act against the people who are saying that ‘minorities’ do not have the rights that everybody else has because they are trying to cause larger problems than there already are. Obama said, in his address last night, that we have to be “vigilant but not afraid”, which means that we must work with others to be able to gain the rights that we need.

Obama’s last topic of the night was that “our democracy is threatened when we take it for granted.” When we use our rights but do not give back to our people, we are, essentially, taking our democracy for granted. We should be looking for help in “rebuilding our democratic institution.” For example, if the issue of same-sex marriage is brought before the Supreme Court during Trump’s presidency, we need to remind the justices that marriage is a right and we should not be allowed to take that away from somebody. If Congress ends up making a decision that outrages many citizens of the U.S., the fault is entirely ours because we did not try hard enough to prevent them from passing the decision.

A topic that Obama mentioned was that the Constitution is just a piece of parchment with no power in itself unless we, the people, give it power. This is a great example of how nothing happens on its own, as our country would be in complete chaos right now if we did not have certain guidelines as to what we have rights to do. “Embrace the task that we’ve been given” is another point that Obama brought up last night. By embracing the task that we’ve been given, we can make America the greatest it can be and hopefully resolve many of the conflicts that have troubled our country. During his farewell address last night, President Obama mentioned that, if we are unhappy with our government officials, there is nothing stopping us from running ourselves. This is important because it shows where almost every politician started. At the end of his speech, Obama requested one thing from us all. His request was for all of us to believe in our ability to make changes, and those words will inspire many in the future. Many people will miss having Barack Obama as a President, but we are sure to have at least some good come from Trump’s presidency, as well as lessons learned. 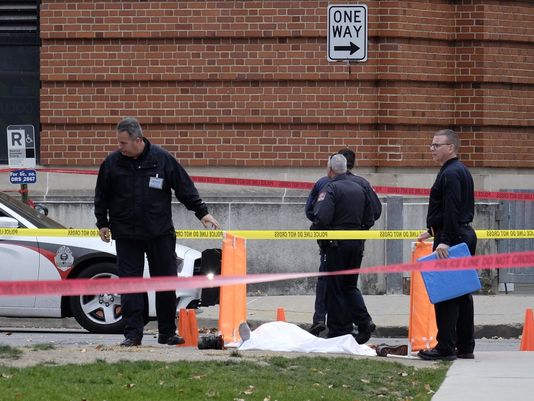 Earlier this morning, nine students at Ohio State University were stabbed by a local Somali student of the school who recently became a permanent citizen of the United States, and whose name was confirmed to be Abdul Razak Ali Artan. Initially, the police department believed that there was more than one attacker, but after observing multiple buildings that were supposedly hiding multiple shooters, they narrowed it down to just one.

Jerry Kovacich, a student at the university, said that the fire alarm had started to ring, and then the man whose motive was unknown used a family member’s car to drive onto the curb and injure the students standing outside of Watts Hall. Most likely, the large crowd of students was standing outside of the building because a fluorine leak was reported to have occurred inside of the university’s chairman of materials science and engineering Peter Anderson’s lab earlier that morning.

According to Chief Craig Stone, the silent attacker then exited the car and started to cut the students with his butcher knife, but luckily an officer arrived at the location in under a minute and stopped the man from continuing his attack. Soon after the policeman resolved the conflict, reports of a shooter inside of Watts Hall arrived. The University’s Emergency Management Twitter sent out a message to its followers that told them to stay safe and to find shelter. Students inside of the buildings on the massive campus barricaded doors and hoped to stay safe as the attacks subsided.

The man was then fatally shot by police during another attempt to stab students at the university with a large knife. Fortunately, these issues were resolved very quickly because the university’s highly trained police department arrived at the attacks just in time to prevent further harm to the students and staff. Many of the buildings reopened at around 11:15 this morning, but over a dozen remained closed for further inspection.